Tadeusz Biernacki is an accomplished composer, arranger, pianist and conductor whose work has graced stages across the country and around the world. Tad is the long-time Chorus Master and Assistant Music Director of the Manitoba Opera and is the past Music Director of the Royal Winnipeg Ballet. Tad was appointed as the Conductor of Hoosli in 2018.

Tadeusz holds music degrees from the University of Manitoba (B.Mus.) and from the Academy of Music Katowice (M.Mus.) in his native Poland. He has performed as a soloist in many European countries and has conducted Symphony Orchestras throughout Canada, the United States, Europe and Asia. He is active locally as a pianist and accompanist for chamber recitals and opera singers.

In 2017, he won a Juno Award for Best Classical Album of the Year, conducting the Winnipeg Symphony Orchestra on the Album “Going Home Star” 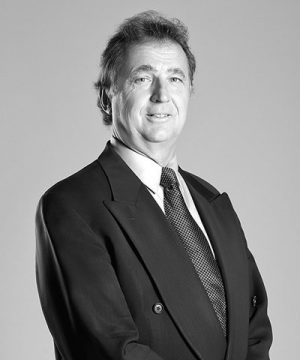 In 1990, Walter was asked to assume the position of conductor of the Dumka Choir and served in this position for the next 18 years.  What was present in great abundance within that group was a profound love for the Ukrainian culture expressed through song.  It was this strong, unrelenting passion within the group which kept Walter motivated to continue as conductor through the 18 years.

In January 2009, Walter accepted an invitation to join Hoosli Ukrainian Male Chorus as a choir member, and was soon appointed as the group’s Assistant Conductor.  In July 2016, after a brief break, Walter graciously accepted Hoosli’s invitation to return as the principal Conductor of Hoosli Ukrainian Male Chorus. Walter retired from the group in March 2018.

William Solomon, himself blessed with a rich baritone voice, was born in Fork River, Manitoba. Upon being exposed to the music and culture of his Ukrainian heritage while growing up in the Gilbert Plains and Dauphin areas, he began his music career as a boy soprano in the Manitoba Music Festival.

In 1947, he moved to Winnipeg and attended St. Andrews College where he participated in ethnic and religious choral music and also demonstrated his talent in the Ukrainian dance art form, serving as lead dancer and instructor. His primary interest has always been in choral music, however, and in 1949, he became a member of the Ukrainian Male Chorus conducted by Walter Bohonos, with whom he furthered his vocal training.

In developing his career in music, Bill also performed with numerous other Winnipeg-based choirs, including the Holy Trinity Cathedral Choir, a sextet known and the “Continentals” and the Canadian Ukrainian Youth Association choir and dance ensemble which he organized and conducted. He was invited to join the Kerr Wilson Male Voice Choir, expanded his vocal training under the tutorship of Kerr Wilson, and became a member of the renowned O. Koshetz Mixed Choir under the direction of Walter Klymkiw. He later assumed the position of conductor of that choir’s male contingent and in 1981, became conductor of the Holy Trinity Cathedral Youth Choir while also leading the Cathedral Ladies Chorus.

In 1985, Bill accepted an invitation to conduct the Hoosli Ukrainian Male Chorus.

William Solomon nurtured his extensive musical talent by training under the maestri mentioned earlier, as well as A. Avdievsky from Ukraine. By virtue of that good fortune and his love for the choral aspect of his cultural heritage, he was committed to excellence in presenting the art form to the public.

Michael Ryczak began his musical training with accordion lessons at the age of five, and enjoyed a childhood enriched by many gifted Ukrainian music and dance teachers in Winnipeg, including his godfather, a fine baritone and violinist. By the age of fourteen, Michael had become an accomplished accordionist, and had taught himself to play the piano, organ, violin, viola and guitar. He played and acted in many school productions. He was a member of the ‘Homyn’ youth orchestra and toured North America with the Chai Folk Ensemble.

While in junior high school, Michael began to play the organ, as well as cantor for church weddings. Weekends were spent playing a variety of other instruments and singing in several popular dance bands. After university, in 1979, he formed the ‘New Life Singers’, a folk group which sang many liturgical services in Manitoba and Saskatchewan. In 1981, he was appointed Musical Director of St. Vladimir’s College in Roblin, Manitoba, where he conducted and managed concert tours to many parts of Western Canada.

In 1987, Michael was invited to join Hoosli as a singer, and soon became the choir’s musical accompanist. In 1991, Michael became the Associate Conductor of the Hoosli Ukrainian Folk Ensemble, and was appointed the full time Conductor and Artistic Director in 2002. Michael also conducts the St. Joseph’s Ukrainian Catholic Church Choir in Winnipeg, Manitoba.

After graduating from St. Vladimir’s College in the summer of 1973, Michael Zakaluzny joined Hoosli as a member of the baritone section. Because of Michael’s musical background, Walter Zulak approached him to assume responsibilities as choir director, when Walter moved from Winnipeg in 1980. Michael’s task was enormous in that he had to maintain repertoire and membership while “learning the ropes” through on-the-job training.

Michael obtained assistance and expertise from individuals such as Tom Sobkow and Brian Cherwick, and, with them, instigated the team concept of direction for Hoosli. The team efforts revitalized Hoosli and achieved numerous successes throughout Michael’s tenure as choir director. With the introduction of William Solomon as choral director in 1985, Michael assumed the role as assistant choral director, and maintained his role as an artistic team member for several years.

Inspired by the talent and dedication of Dr. Paul Macenko, his choir director at St. Vladimir’s College, Walter Zulak, with a handful of graduates, formed the St. Vladimir’s College Alumni Choir. As a student of St. Vladimir’s, Walter acquired a great love of Ukrainian music by singing in the College choir. He was also very fortunate to be selected by Dr. Macenko to attend private lessons to learn the art of directing a choir. Dr. Macenko not only taught him many intricate techniques, but also spoke of the music and history of the many composers.

Walter directed Hoosli from 1969 to 1980, when he left with his family, to live in Grande Prairie, Alberta. Although distance separated him from the boys he loved, he kept in touch and would attend their performances whenever possible.

Errors and omissions are unintentional. Please contact us to report any errors or help update our lists.