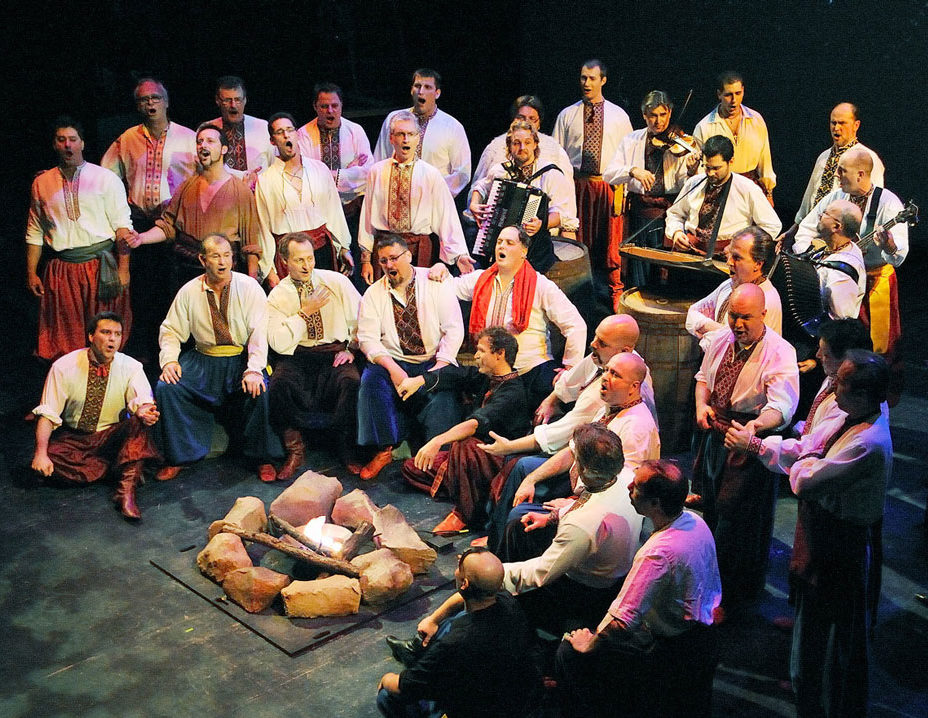 In September of 1969, Walter Zulak, along with several alumni of St. Vladimir’s College (Minor Seminary) in Roblin, Manitoba, organized a male choir, appropriately named the St. Vladimir’s College Alumni Choir.  It was during their time at the College, under the direction of distinguished scholar of Ukrainian liturgical and choral music, musicologist Dr. Paul Macenko, that their passion for choral music was born.  Inspired by Dr. Macenko’s instruction, they set out to create a group that would encourage, promote, and preserve their Ukrainian heritage.

Their original performing venues were the various Ukrainian Catholic Parishes in Winnipeg and rural Manitoba, where they were best known for singing of the Divine Liturgy, social events, and concerts. In May of 1973, having performed widely in Manitoba, as well as in Saskatoon and Kenora, the group traveled to perform concerts in Omaha, Nebraska.

In 1975, the group grew to include a small dance troupe and the polka band About Five. Turning to Dr. Macenko for inspiration to reflect this growth, the group was re-named Hoosli. In the spring of 1976, Hoosli released its first album and toured Saskatchewan and California. Hoosli made its first television appearance in the late 1970’s as part of CBC’s “Feast of Koliada”. 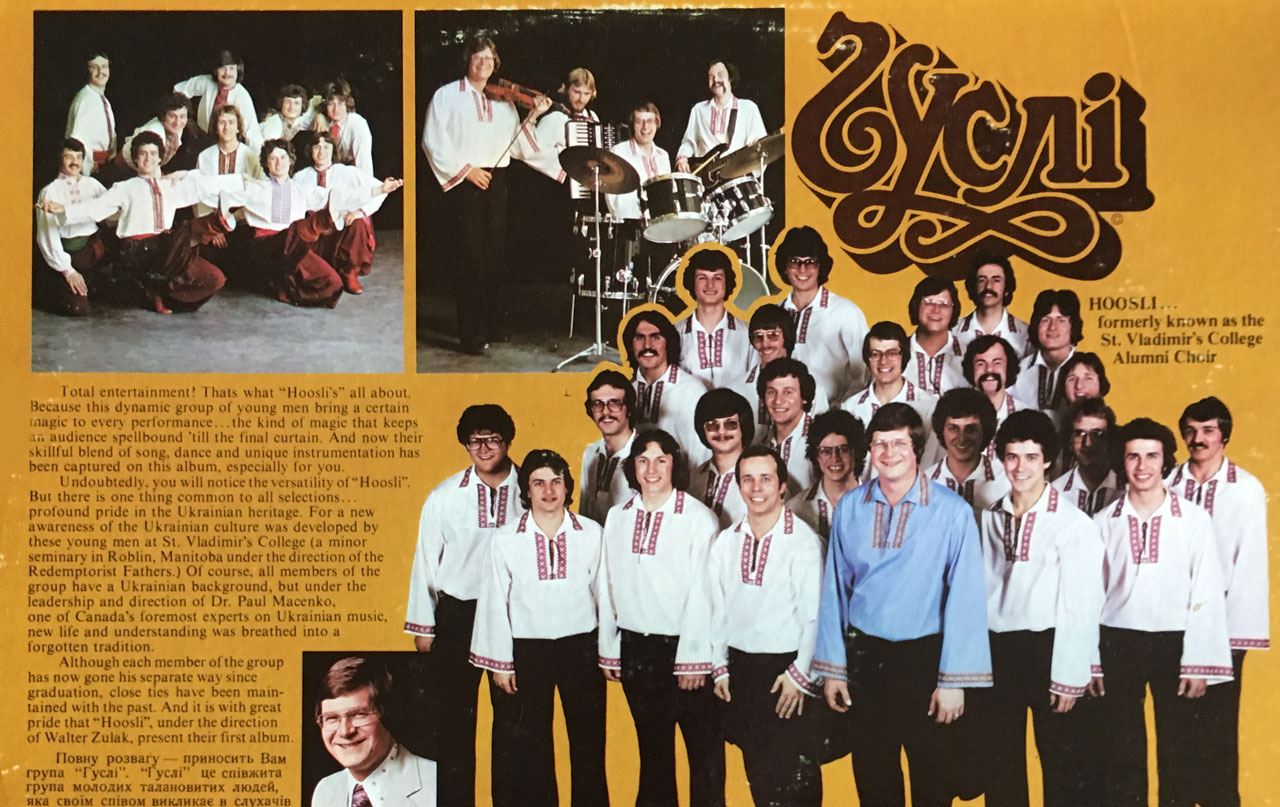 After the departure of Walter Zulak in 1980, Hoosli faced some difficult times, and ceased operations for a short period in 1982.  Fortunately, a determined group of just nine members refused to let the spirit die.  Led by Dan Gusztak, Danny Lega, and Michael Zakaluzny (who served as the group’s conductor) the group turned outward to look for help in rebuilding Hoosli.  Shortly after being recruited to the group in 1982, Tom Dudych led a major recruitment drive, which included bringing in William Solomon as conductor, as well as many talented singers, helping to lay out the blueprint for what Hoosli would become in the future.  With a renewed spirit, Hoosli set out to establish itself as an institution of the Ukrainian community by forming a Board of Directors, adopting a constitution (1986), filing for incorporation (1988), and achieving status as a charitable organization (1989).  Artistically, the group also grew dramatically as it released its second album in 1984, third album in 1987, appeared on CBC specials in 1984 and 1989, and performed at events stretching from Edmonton to New Jersey.  The recruitment of William Solomon as conductor (1985), and Cecil Semchyshyn as artistic director (1988), brought the group a vast knowledge of Ukrainian folk music, with particular emphasis on the unique sound of a male choir. 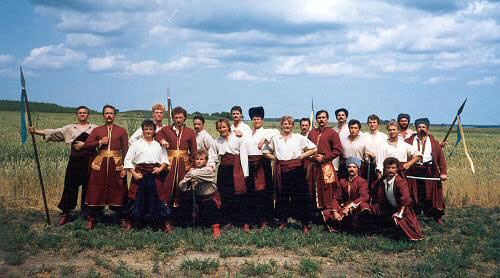 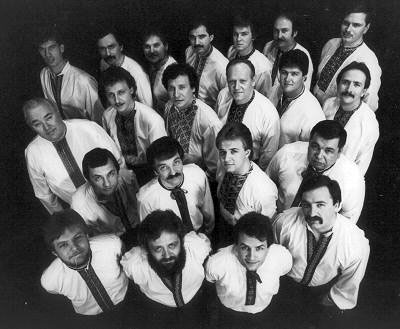 The 1990’s started strong with Hoosli’s 20th Anniversary concert (February 1990) at the Winnipeg Centennial Concert Hall, featuring guest artists Rusalka Ukrainian Dance Ensemble.  Hoosli was then featured as guest artists at two Rusalka concerts – 30th Anniversary (1993), and “Past, Present, & Future” (1996).  Hoosli also performed at the O. Koshetz Choir 50th Anniversary Concert in 1994.  Over these ten years, Hoosli would release three more albums – 20th Anniversary (1991), Rejoice (1994), and Encore (1998).  In 1995, Hoosli welcomed renowned accordionist Myron Kurjewicz, whose unparalleled instrumental talents became a defining feature of Hoosli recordings and performances. The celebration of Hoosli’s 25th anniversary in October 1995 will forever be remembered as the night a kozak rode into the Fairmont Winnipeg on horseback!  In January 1997, and again in January 1998, Hoosli was welcomed as the headline performers of the Jasper Park Lodge Malanka.  Hoosli then closed out the decade with a 30th Anniversary event in October 1999. 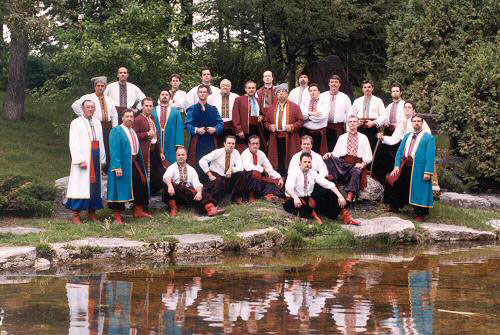 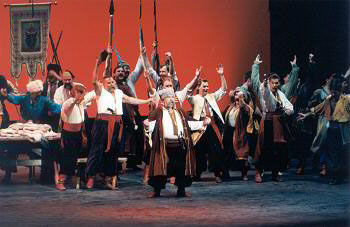 In 2002, Hoosli once again welcomed Zoloti Struny, a Winnipeg-based bandura ensemble, as accompanists on its seventh album – Play, Minstrel, Play – which includes many powerful works by Taras Shevchenko.  Having accomplished so much during his time with the group, William Solomon retired as conductor in 2002.  Michael Ryczak was elevated to conductor after having served as assistant conductor for several years. Soon after, Michael Zakaluzny returned and was named assistant conductor.  In October 2004, Hoosli celebrated its 35th anniversary along with Zoloti Struny, Rusalka Ukrainian Dance Ensemble, and a group of talented musicians and female vocalists recruited to collaborate with Hoosli for the event.  Just as the original members of Hoosli looked to their past for inspiration, September 2005 saw Hoosli welcome the return of William Solomon for a second stint as conductor.  The addition of accordionist Ken Kuchma, as well as an unprecedented surge in membership, helped propel the group towards its next milestone performance.  In October 2009, Hoosli hosted its 40th Anniversary Gala Concert, and released its eighth album – Divine Liturgy of St. John Chrysostom in the Byzantine Rite. 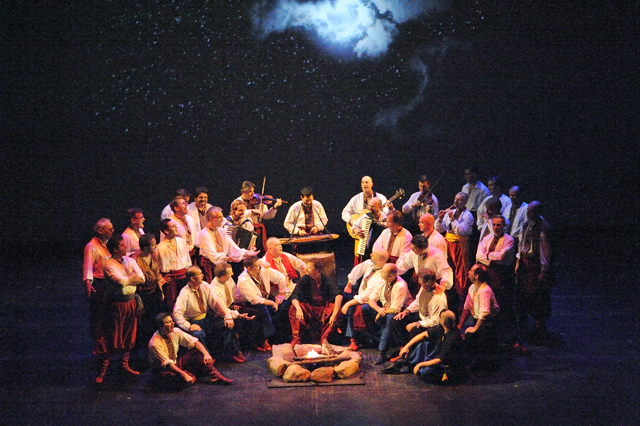 Hoosli’s fifth decade has been highlighted by several collaborations with other choral groups to showcase its music to even larger audiences.  Hoosli was part of “Brothers in Harmony” Male Chorus Symposium hosted by the Bison Men’s Chorus in May 2010.  Two years later, in September 2012, Hoosli and the Ukrainian Bandurist Chorus performed two concerts together in St. Catharines and Toronto. These were recorded and released by the groups as the Brotherhood Concert Series (Братство) album.  The success of the first two Brotherhood concerts led to additional performances in Winkler and Winnipeg in October 2014.  In December of 2016, Hoosli released its tenth album entitled Christmas Star (Різдвяна Зірка).  After nearly thirty years as conductor, William Solomon’s career came to a close with the completion of this album, and assistant conductor Walter Skakun took over as conductor in July 2016.  In early 2018, just as planning and preparation was beginning for its 50th Anniversary celebrations, Hoosli welcomed accomplished composer, arranger, pianist, and conductor, Tadeusz Biernacki, as its newest conductor.  In recent years, the reach of Hoosli’s music has grown to global proportions – between the advent of digital music platforms, and the exposure to international audiences through its anthem performances at Winnipeg Blue Bombers, Winnipeg Goldeyes, and especially Winnipeg Jets games.

In 2019 Hoosli celebrated is 50th Anniversary with a series of events and performances that culminated with a Gala Concert at the Centennial Concert Hall. The concert featured 50 years of Hoosli music along with excerpts of the Opera “Taras Bulba”. Guest artists included the Winnipeg Symphony Orchestra, renowned Soprano, Andriana Chuchman, Rusalka, and Accordionist Myron Kurjewicz. The concert was conducted by Tadeusz Biernacki, with a guest appearance of long time conductor William Solomon. Hoosli’s music for the concert was scored for the WSO by our conductor Tadeusz Biernacki. The concert was an ambitious undertaking and a great success. 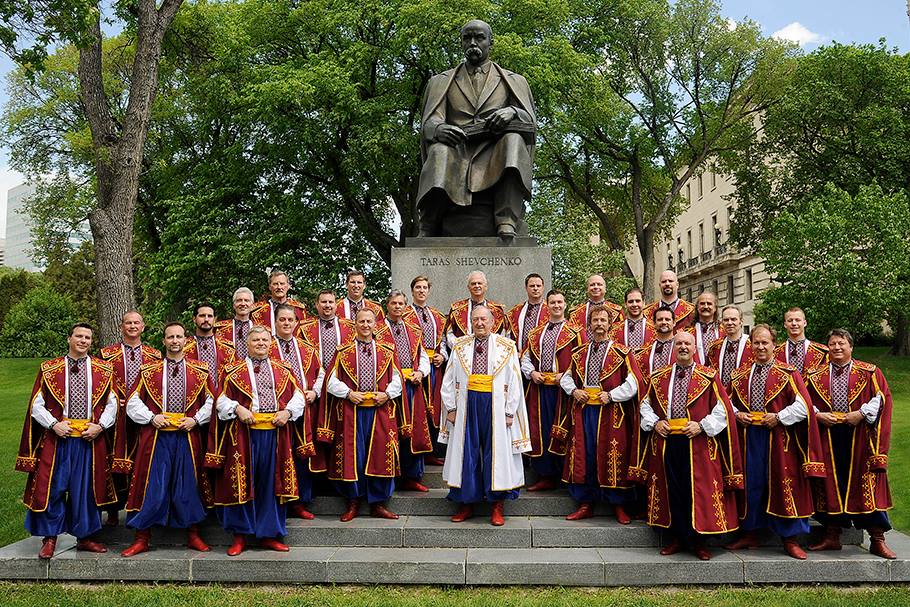 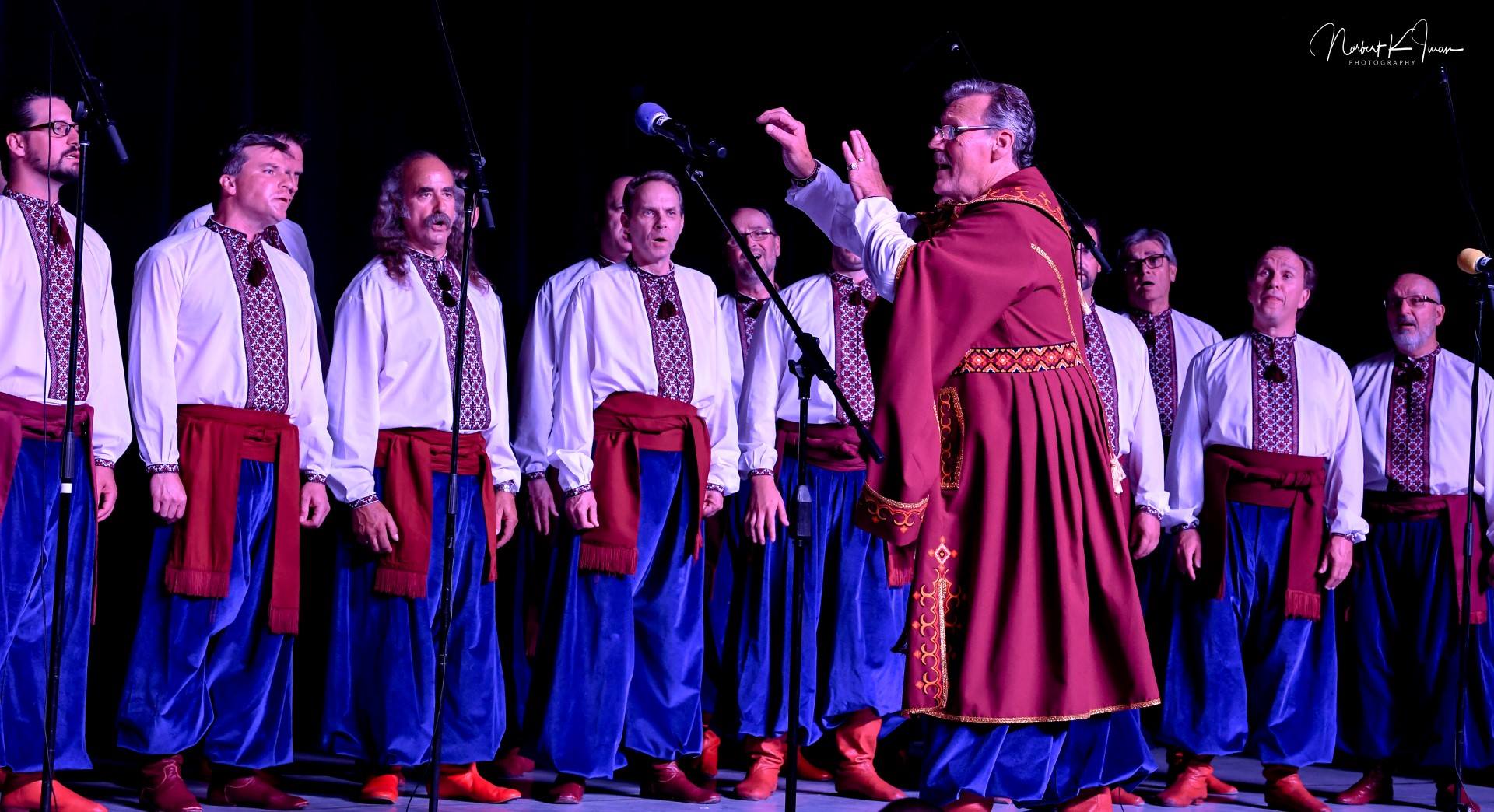 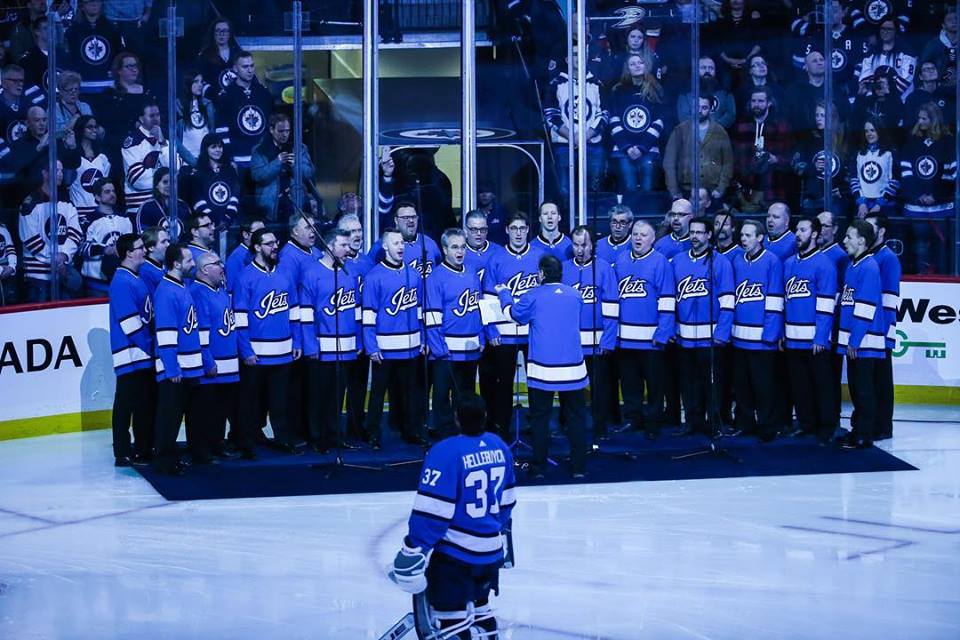 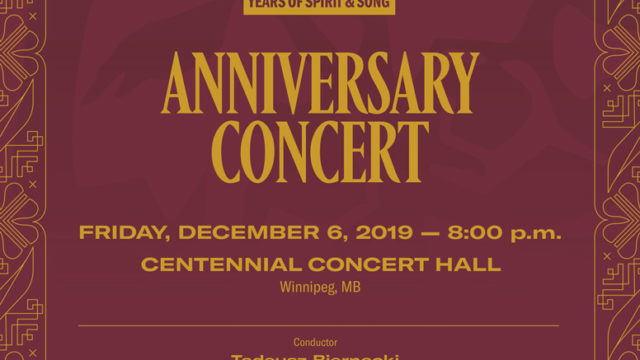 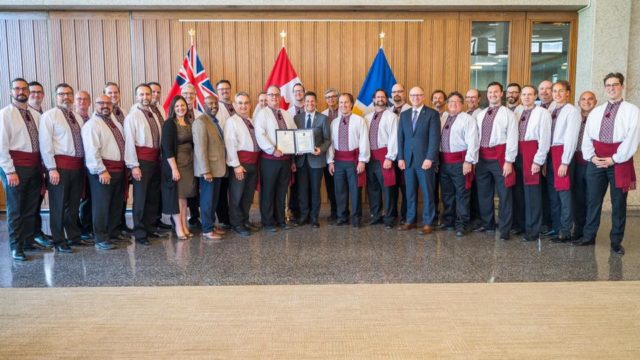 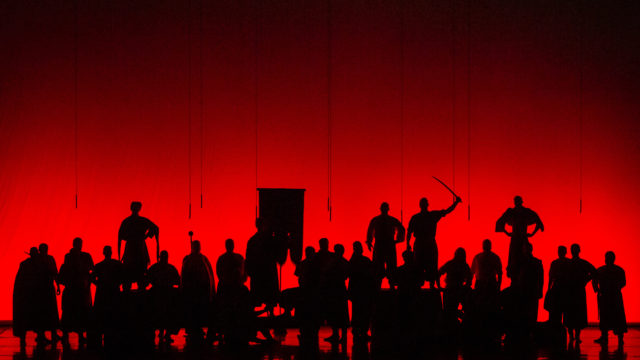 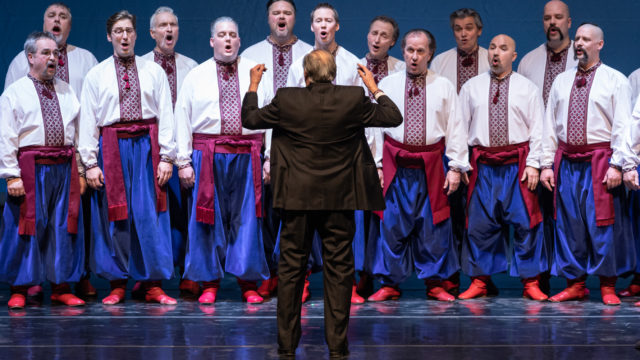